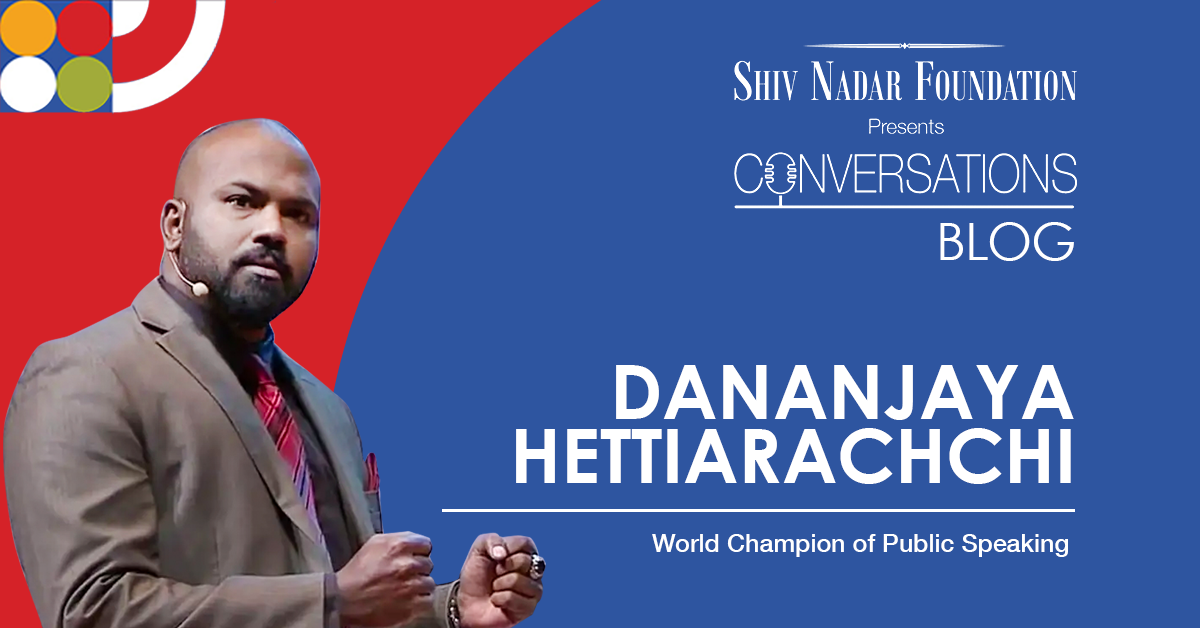 Dananjaya Hettiarachchi believes in reinvention. He believes in people. And he believes in expressing one’s truth. That’s the combination that goes in to making a remarkable motivational speaker; in fact the best public speaker in the world, according to Toastmasters International, the world’s leading authority on public speaking and communication.

Chatting with Colonel Gopal Karunakaran, President, Shiv Nadar University and CEO, Shiv Nadar Schools on the Shiv Nadar Foundation’s Facebook Live event, Conversations, Dananjaya, with his smiling and optimistic demeanour gave the listeners food for thought on living a life that is exemplary. In fact, Dananjya’s been a friend, and a self-professed fan of the Shiv Nadar Foundation for some time. He’s visited the schools, and coached the teachers and students as well, making a huge impression!

As inspirational figures go, they don’t come better than Dananjaya. A school dropout, who even got arrested, he seemed to be heading into a downward spiral. How he changed the course of his life, becoming the first Asian to win the Toastmasters’ public speaking championship in 2014, makes him a tremendous role model for just about everyone who wants to make their passion their profession, but in particular those who need a spark to guide them through dark times.
The first thing that altered his trajectory was seeing the tears of shame on his mother’s face when she saw him behind bars. The next, was his father’s continuing faith in him and taking him to that first Toastmaster’s Club meeting. There, he met Balraj Arunasalam, who spotted his gift and helped him harness it. Then, the wonderful woman he married who has supported him through thick and thin. It was the people and mentors in his life that made him rise, he asserts. There were many times he wanted to quit - from the competitive public speaking circuit, from work…but he knew that there are some people you cannot say no to. And because of those people, he persevered. These people are the focus of his competition winning speech, (you can see it on YouTube here) people who said ‘I see something in you, but I don’t know what it is!’
The re-invention is a continuous process. From aimless young man to a graduate from college, to a public speaker, life coach and corporate trainer, and a parallel career as CEO of an HRD firm. He believes firmly that no matter how successful you become, you must constantly re-invent yourself. Don’t hold on to what you’ve achieved, or you’ll never be able to take a risk again.

And then there is integrity. A speaker needs context, clarity, and the ability to get as close to their own truth to really reach out to their audience, connect and empathise with them.

The competition itself, held in the US, where he reached after ten years of gruelling training, was a high point. Yes, he was nervous, but to Dananjaya, fear is a great motivator. The fear of mediocrity propels him! A self-professed introvert, Dananjaya has used that fear to achieve much.

This positive person’s last bit of advice can go a long way. He says, ‘At this time, during the Covid 19 pandemic we will all lose a lot. But it’s when you lose you can come back up, and build something closer to the truth. And when you come out of it you’ll have stories to share. Let’s change the narrative and share it with everyone!’

The listeners, many of whom are part of the Shiv Nadar family, including students and alumni who had logged in from the many different parts of the world they are in now, had a lot of questions for Dananjaya. His answers gave everyone a shot of optimism!