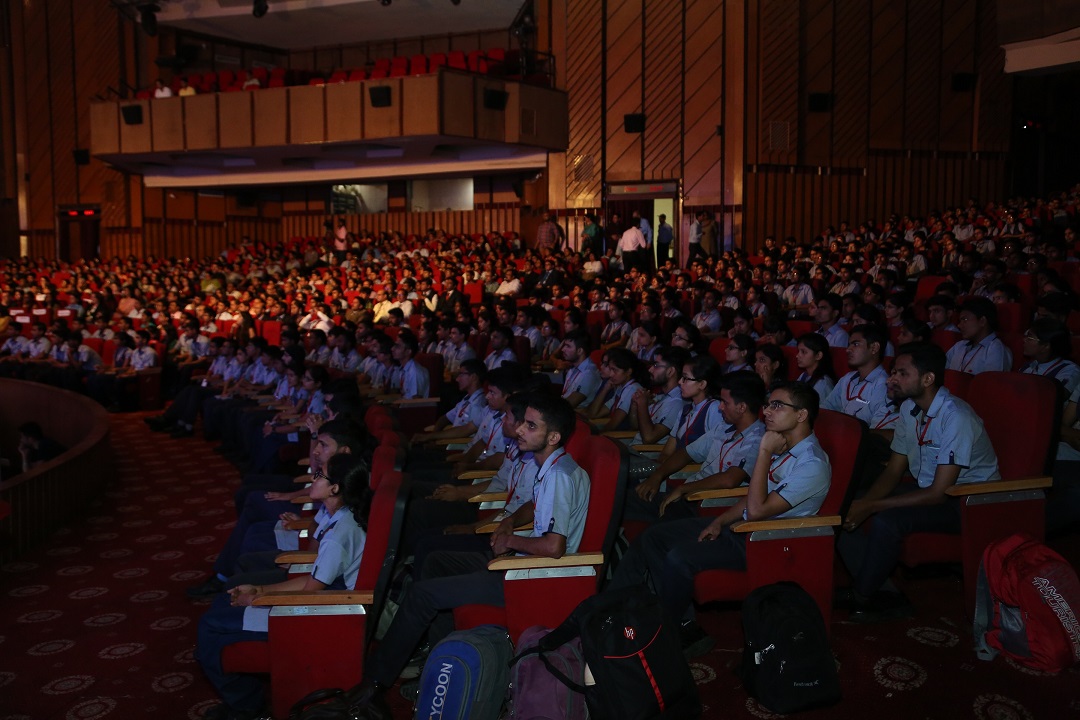 VidyaGyan, a leadership academy for economically underprivileged, meritorious students from rural Uttar Pradesh, today celebrated the graduation ceremony of its 2018 batch. A total of 363 students graduated from the school this year after appearing for their CBSE Class XII board exams. The event was graced by Mr Suresh Narayanan, Chairman and Managing Director, Nestle India and Ms Geeta Goel, Country Director, India, Michael and Susan Dell Foundation as guests of honor, who addressed the students and shared their personal journey with the audience.

The School registered an average score of 87% with 36% students scoring above 90%. Sudeeksha Bhati, the school topper who scored 98% in Humanities, also emerged as the district topper in Bulandshahr.

This year, one student from the 2017 batch cleared the Medical Entrance Test (NEET) and will be pursuing undergraduate in Medicine form Kanpur Medical College, ranked second in UP. Another student was selected for a B. Sc. Nursing Course and will receive training at Armed Force Medical College, Pune. Four years down the line she will be commissioned as Lieutenant in Army Medical Core.

Apart from academics, the students have also won recognition in Sports, Art, Music and other competitions. The VidyaGyan boys’ athletic team won the Under 14, Under 19 and overall Championship in CBSE Cluster meet. In the National meet one student won a Silver medal in athletics and the boys relay team won the Bronze medal. In the Reliance Foundation Youth Sports tournament the VidyaGyan Girls team was the Winner and won a cash prize of 25000.

Speaking at the occasion, Roshni Nadar Malhotra, Chairperson VidyaGyan and Trustee, Shiv Nadar Foundation said, “What the students have achieved is not just good grades and a college seat. They have managed to defy all odds of their economic and societal disadvantage to prove that, given the right educational environment, every child has the potential to become a star. They have set the bar high and I hope that every year our students will redefine this standard for bigger successes. The journey of these students will not only transform their lives and the lives of their families but also encourage more students and their families to invest in education for a better future.”

VidyaGyan provides underprivileged, meritorious students free, world-class education to help them transcend the disadvantages they face and compete with their urban counterparts. VidyaGyan students come from families of farmers, daily wage earners, among others in rural Uttar Pradesh with an annual family income of less than Rs. 1 lac. Every year, VidyaGyan handpicks approximately 200 meritorious students from a pool of 250,000 children who apply from across 75 districts of Uttar Pradesh.

Established in 2009 by the Shiv Nadar Foundation, VidyaGyan (www.VidyaGyan.in) today houses 1900 students across two campuses in UP in Bulandshahr and Sitapur. The Academy was launched to bridge the urban-rural divide by selecting, nurturing and developing future leaders from the underprivileged communities of rural Uttar Pradesh. A fully residential academy, VidyaGyan not only takes care of the education of its students but of all their needs. VidyaGyan addresses social imbalances and envisions nurturing and creating leaders who would be the inspiration and role models for their families, communities and society at large. The Foundation hopes that this will raise many more aspirations.

The Shiv Nadar Foundation (www.ShivNadarFoundation.org) has been established by Shiv Nadar, Founder, HCL - a $8.5 billion leading global conglomerate. The Foundation’s mission is to contribute to the process of national development and social transformation by establishing institutions and undertaking new initiatives in the fields of education and culture. The Foundation is committed to the creation of a more equitable, merit-based society by empowering individuals to bridge the socio-economic divide through philanthropy-based transformational education.

The Shiv Nadar Foundation set up the SSN Institutions (www.SSN.edu.in) in 1996, comprising the SSN College of Engineering (already a highly ranked private engineering college in India), in Chennai, Tamil Nadu. The Foundation has also set up VidyaGyan, a residential leadership academy for meritorious rural children, at Bulandshahr and Sitapur in Uttar Pradesh. In addition, the Foundation runs the Shiv Nadar University (www.snu.edu.in), an international multidisciplinary university with strong research orientation located in Greater Noida in India’s National Capital Region and the Shiv Nadar School (www.shivnadarschool.edu.in), a network of progressive urban schools across India aimed to provide children with education that creates lifelong learners. The Foundation has also set up the Kiran Nadar Museum of Art (www.knma.in), India’s largest private philanthropic museum in modern and contemporary art with the vision to take art to the common public.