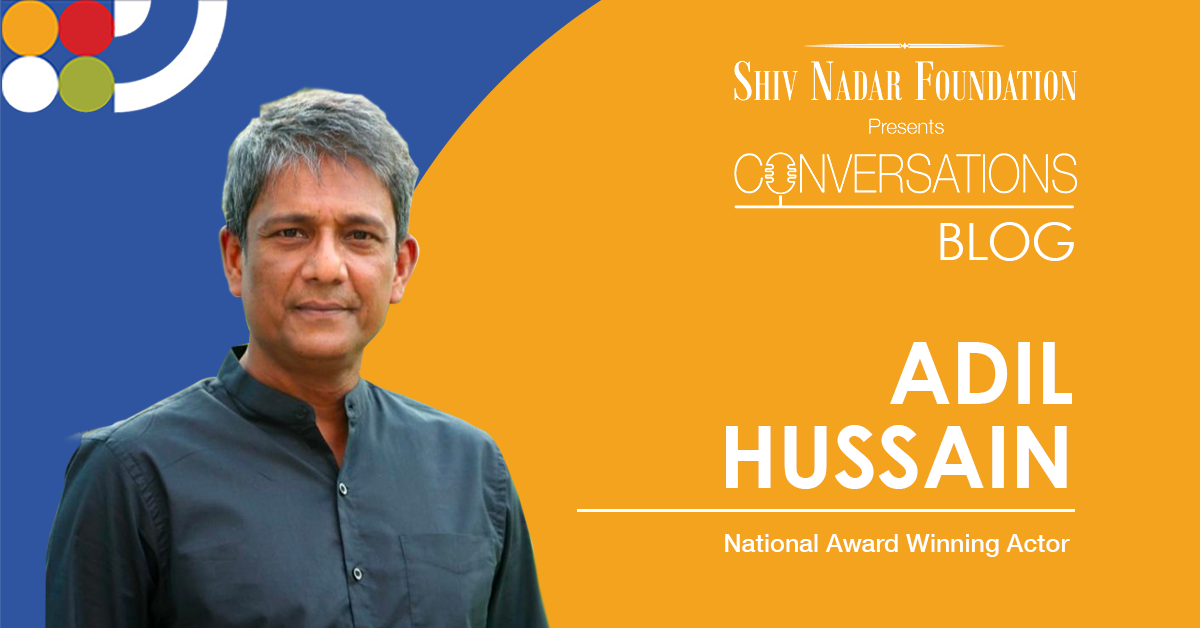 When Adil Hussain was asked during the Shiv Nadar Foundation’s FB Live event Conversations what the key is to the art of acting, he said, ‘Love.’ This emotion permeates every aspect of this brilliant actor’s work. Yes, he is a thinking actor, having done theatre and art house cinema of the best kind…but he is also a feeling actor, someone whose performances nudge us to experience the nuances of life.

Adil grew up in a large family in Goalpara, Assam, the son of teacher. By the time he was thirteen, he knew he wanted to be an actor. His father was not on board with this ambition and worried about his son’s future. But Adil was in love with the stage! He even convinced his father to let him go to college in Gauhati where he knew he would get opportunities to perform.

It was in the big city that he met Tapan Das, the theatre and film actor, who introduced him to Stanislavski and Grotowski, and also informed the incredulous young man that there was a school in Delhi where he could actually study acting. Adil applied and was one of the twenty students to enter the National School of Drama that year. There he encountered wonderful teachers who nurtured that love even further, like Maya Krishna Rao and Arjun Raina, as well as Khalid Tyabji. Other teachers include Sue Weston from Wales. ‘They made me fall in love with the study of aesthetics in the world of art, literature etc, and understand its relationship with acting.’

For the students and teachers from the Shiv Nadar Foundation’s institutes listening in on Conversations, this idea of fostering love for one’s area of study must seem familiar!

After NSD, he got a chance to go to London to study theatre on a scholarship. ‘After London, realized I knew nothing about acting. I saw a performance by Tyabji and was blown away. I went to him. He said, I need you to have 1 lakh, not to pay me, but to look after yourself while you’re training with me. So, I joined Assamese commercial theatre. I performed for nine months every evening, every fourth day in another town or village. I earned that money and came back to him.’

It was worth it. Tyabji’s lessons in physicality combined with his other learnings and experience brought Adil great acclaim in the world of theatre. At some point he made the transition to films. From Mukti Bhawan to Life of Pi and English Vinglish, every film he chooses is exceptional in some way and spotlights his skill and screen presence. And yet, there are times where he isn’t recognized off screen! His modesty of demeanor might have something to do with it, as it’s hard to miss this striking looking man.

Adil has done films in multiple languages including Norwegian, diverse types of roles and has a National Film Award. Getting into character, he says, has very little to do with the physical. ‘You must update your software, your inner being gently leaning towards the character…. If the person you’re playing is different from you, you have to put your judgement and personal feelings aside have lots of empathy. To play Hitler you have love Hitler.’

Adil is dipping his toes back into theatre and will soon be playing his dream part – of Krishna. He regrets that governments have not fathomed what the role of theatre is in bettering society; how through it, people can experience the complexities of being and create empathy for others’ points of view. If they did, they would put more funding into it!

The serene and positive vibe one gets from watching and listening to Adil Hussain might partly be due to the fact that he is a fan of meditation and has been doing energy work for twenty years.  ‘It inspires me, has stabilized me as a person in any kind of crisis. It’s a survival tool for me .’